An 11th century castle, its guest houses and outbuildings on a 45-ha, unspoilt, natural estate in th

An 11th century castle, its guest houses and outbuildings on a 45-ha, unspoilt, natural estate in the midst of the Trièves region.
Described as 'a mountain cloister' and 'a sunrise amphitheatre' by Provencal writer, Jean Giono, Montmeilleur stands in a dominant position, in the centre of a vast estate composed of meadows, woods and private hunting grounds. There are no visual nuisances to disturb the panoramic view for as far as the eye can see. Furthermore, a village with all shops as well as primary and secondary schools is but 5 minutes away. It is 45 minutes south of Grenoble, with its Tgv train station and 3-hour links to Paris, 1½ hours from Lyon-Saint-Exupéry international airport and 2 hours from Geneva. Adventurers can take off from this property's grassy runway in single or twin-engined, light aircraft.
Once a stronghold house, this property includes a castle, spanning approx. 900 m² of living space, three independent, converted guest houses, spanning between 120 and 200 m² of living space, an interior, cobblestoned courtyard, numerous outbuildings, a 12x6 m swimming pool, an exercise and sauna room, a spa, a French formal garden and a vegetable garden, all in an excellent state of repair.
Although the exact date the stronghold house was constructed is unknown, everything points to that fact that it was sometime around the year 1000, that is to say the early Middle-Ages. Around 1450, King Charles Vii, alarmed by the plotting of his older son, the future King Louis Xi, simply gave him the province of Dauphiné to govern as he saw fit under the name of Louis Xi. The latter was to live there for ten years and became very popular in the Trièves region, where the stronghold house became his favourite hunting lodge and took pride in his royal visits. Up until the end of the Middle-Ages, Montmeilleur belonged to the Bérenger-de-Morges family. Their coat-of-arms is still to be found today on the entrance gateway and the monumental fireplace in the large reception room. Following a succession of leading citizens, including the Marquis-de-Langon, Montmeilleur was destroyed at the time of the French Revolution, archives were lost and the castle fell into ruin.
Sold in 1841 to Constantin-Abrard, Montmeilleur remained for more than a century in the hands of this same family, descending directly through the female line and including the Thibaud-Gibbs family who undertook major renovation works around 1875. This tradition came to a halt when the son of Madame-Thibaud sold the property in 1957.
In one of his imaginary constructions, 'A King Alone', a Provencal, complex novel that takes place between Lalley and Chichilianne, Jean-Giono greatly enhances his memories of Montmeilleur, where he stayed numerous times, by taking inspiration from the personality of Madame-Thibaud.

The castleIts three levels are reached via two stairways, one of which, a magnificent spiral stairway on the south side, is housed in a tower with a square base, becoming octagonal. A large part of the main building, laid out in two wings facing south and east, was damaged on numerous occasions, before being pillaged during the French Revolution. Although most of the interior historic features were lost, the exterior still has a part of its medieval and Renaissance appearance. The four remaining towers bear witness to its vocation of fortress, probably up until the end of the 16th century. After the Wars of Religion, the building no longer had a military function and some of its defensive features disappeared: the moat, perimeter walls and drawbridge were replaced by terraces, gardens and outbuildings.
Ground floor
The main entrance is at the foot of the hexagonal tower, on the castle's south facade. The floors are laid with terracotta tiles dating from the 19th century, some of which were found in the castle attic.
The ... 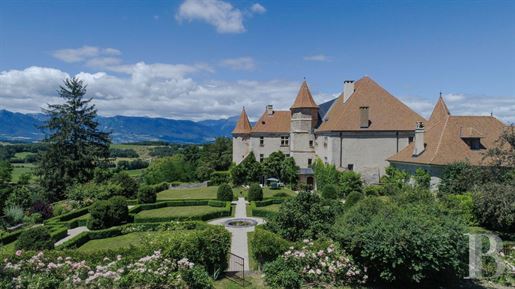 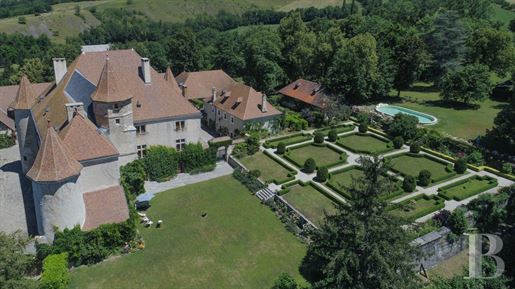 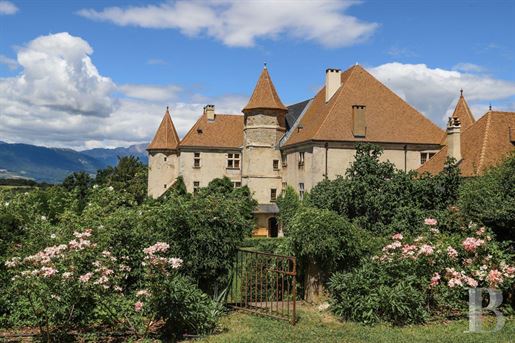 This property is near Grenoble, in Isère (region Rhône-Alpes).

In your space, save your alerts and favorites, and find the ideal house in more than 56 different countries.
Connect
Create an account
‹ › ×

Green-Acres reminds that the use of the form by professionals for the purposes of non-sollicited direct marketing (spam) is prohibited. In accordance with legal obligations, Realist records your internet address (44.192.52.167) and reserves the right to sue in the case of fraudulent use.