Important french castle for sale in the Indre departement.

Ref.3866 : Listed french castle for sale in the centre of France.
This important village castle in the Indre department was built in the 15th century on the foundations of a late 12th century fortress, and was mainly redesigned in the late 19th century with neo-gothic decoration.
The countryside is beautiful, authentic and peaceful, and you can live off the resources of the village and the small medium-sized town 8km away.

The castle has retained the appearance of a fortress, even though two sides of the quadrilateral have been levelled, thus opening up the castle to the light and making it lose its military function. However, it is still as imposing as ever, towering towards the sky and surrounded by walls, in the middle of its park. The construction on a terrace, its high towers, the impressive volume of the rooms and its nine centuries of history make it a real castle.
The raised ground floor opens onto the terrace, which offers a beautiful view of the park that surrounds the castle. It comprises two hallways, a dining room, a lounge, a kitchen, a library, a toilet, a bathroom and a laundry room. On this level, there are 300sqm.
On the first floor, a vast reception level comprising three lounges in a row totalling 200sqm under 4.80 meters of joists. Chapel and master flat comprising a bedroom, a study, a bathroom, wc and dressing room.
On the second floor: three other prestigious flats each consisting of a bedroom, a sitting room or study, bathroom and wc. Various other rooms, hidden passages through walls up to 2 metres wide.
Above, under the attic, a 240sqm leisure room, bathroom and a staff flat with 3 bedrooms, living room, kitchen and bathroom.
The whole of the property totals 1380sqm.
It is worth noting the remarkable architectural quality, the quality of the equipment and the careful restoration: parquet or marble floors, monumental armorial fireplaces, polychromy of the chapel, friezes, etc. All this will leave a strong impression.

The outbuildings:
Only half of the entrance châtelet remains, and so the drawbridge has disappeared as well. However, the 15th century flamboyant gothic dwelling is still there and constitutes a comfortable, but unfinished, 6-room annex house. Heating by the castle's boiler.

In the extension of this long building, there is an office, a tavern, a stable and a tack room. And at the end, another tower, fitted out, forming the corner of the quadrilateral.

On the first floor, probably a former garrison dormitory, with monumental fireplaces. The fluids are distributed here. And here and there you can still find loopholes, a latrine, a stunner, a fire hydrant, because the traces of history are very present in these buildings which have been little transformed over the centuries.

In the east tower, 3 levels of a room, a gunloft, a spiral staircase.

On the opposite side, an interesting 15th century gallery, with columns with foliated capitals, partially embedded in the masonry. This building must have been used for agricultural or service purposes, but remains quite rare in its current state.

Enclosed park of 5.80 hectares, planted with large ornamental trees, probably reconstructed and laid out with paths towards the end of the 19th century.
Vegetable garden with part of an orchard (cherry, apple, walnut and pear trees)
The park is enclosed by walls, which provide privacy in the park from the village. The result is a very good outdoor atmosphere.

We invite you to visit our website Cabinet Le Nail ( /en/ ) to browse our latest listings or find out more about this property. 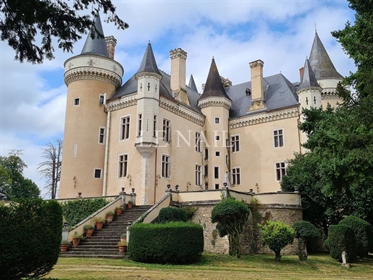 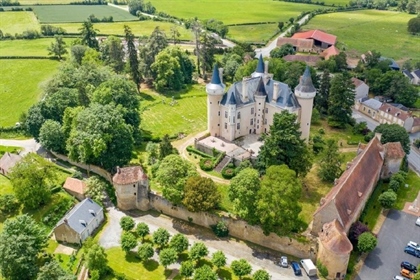 This property is near Châteauroux, in Indre (region Centre).

Green-Acres reminds that the use of the form by professionals for the purposes of non-sollicited direct marketing (spam) is prohibited. In accordance with legal obligations, Realist records your internet address (3.236.138.35) and reserves the right to sue in the case of fraudulent use.