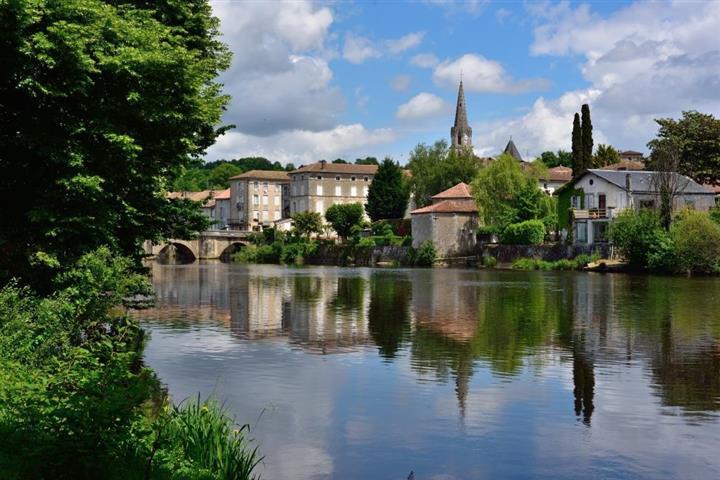 The Vienne river in Cofolans, Poitou-Charentes

When one speaks about Poitou-Charente, one thinks of Royan, La Rochelle, long sandy beaches and those marvellous islands. But this region has much more to offer. Marais poitevin, is a great example of a lesser known gem in the region, it is magical and relaxing. Sale prices for property in Poitou-Charente are still reasonable despite constantly increasing demand. All types of house can be found in Poitou-Charente: traditional Charente style houses in La Rochelle, stone farmhouses or smart maisonettes with colored shutters on the Ile de Ré. Its sunny, temperate climate makes it a major holiday destination or for year round living. For lovers of fine food: oysters from Marenne and bouchot mussels galore.

Crossed by different rivers, Charente is a department where one can live well and resource oneself. With good high-speed train and motorway networks, this is a lively department where a lot of festivals take place every year. Over half its economy is based on exporting the famous cognac, although it is not forbidden to drink it in this department! Property in Charente is very well priced and there are many properties for sale. So, a farmhouse with wine store in the countryside, one of those houses, so typical of Charente, around the old city of Confolens? But maybe you would prefer Angoulême to be at the centre of the Comic Book Festival?

Apartments and houses for sale in Charente

Who does not know La Rochelle, the sandy beaches of Royan, Fort Boyard, or the picturesque islands with their colorful shutters? But Charente-Maritime is not only this, as there is also Le Marais Poitevin, refuge for migrating birds, or Saintes and its remarkable historic monuments that date back to the height of the Roman Empire. Let's not forget the exceptional number of hours of direct sunlight here and food that will delight fish and seafood lovers! It is certainly a much sought after destination, and consequently, property can sometimes seem to be expensive, especially on the coast. So, why not look for an old village house, or an old mill around Saint-Jean-d'Angély or Jonzac? If it is the sea that attracts you, look at the houses in Saint-Georges-de-Didonne, charming family seaside resort.

Apartments and houses for sale in Charente-Maritime

A pleasant temperate climate, lovely rolling countryside and charming, human-sized towns are the guarantee that the department of Deux-Sèvres has a relaxed rhythm of life. If one adds to this the famous marais poitevin, one understands why this department has so many visitors. Despite this, property in Deux-Sèvres remains fairly affordable and one can find properties for all tastes and all budgets: half-timbered houses in the lovely town of Parthenay, old farmhouses around Bressuire, or small houses with gardens in Coulon, capital of 'Venise Verte'.

Apartments and houses for sale in Deux-Sèvres

Its exceptional architectural heritage makes Vienne a rich department where it is hard to be bored, and this is before we think of Futuroscope and the Vallée des Singes that attract a great number of tourists. Its prefecture, Poitiers, is only 2 hours from Paris or Bordeaux. But there are a good number of other delightful little towns, like Montmorillon, on the banks of the Gartempe, where the lifestyle is good and with houses suitable for all budgets. Property in Vienne is varied and one can still find some good deals. So, an apartment in Poitiers, a village house in Civray, or a farm cottage on L'Isle Jourdain?

Apartments and houses for sale in Vienne

To remember your favourites, connect:
Connect
Create an account